Who can beat Bart Swings? 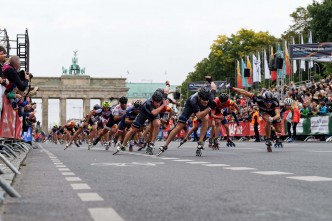 There will be no stopping the thousands of enthusiastic skaters waiting at the starting line on Saturday afternoon when the traditional sounds of AC/DC’s “Hells Bells” ring out through the speakers. The streets will be open to skaters for a 42.195 km ride through Berlin, cheered on by 250,000 spectators as they cross through unique parts of the city. Pros and amateurs from around the world will celebrate the end of the season here, making the BMW BERLIN-MARATHON a huge festival on wheels.

A hot race for the pros

"You can only become immortal in Berlin," so they say. The title of world champion is awarded annually in numerous disciplines; however, in Berlin there can only be one victor. Bart Swings of Belgium has already achieved this five times in a row. Will he make it to the top of the podium for the sixth time? This is what his biggest competitors hope to prevent – most of all, his teammate and reigning marathon world champion Felix Rijhnen. The athlete from Darmstadt will attempt to become the first German male in its 21-year history to win the race. But he is not alone. Ewen Fernadenz, two-time winner from France, is also hot for the title and knows Berlin's streets well. Gary Hekman and Patxi Peula also do not want to settle for second or third place. The Dutchman and the Spaniard were among the few athletes who could compete with the exceptional skater Bart Swings in recent years, and they believe it is time for a changing of the guard.

For the women, the race seems more open than ever. Last year’s surprise winner and current course record holder (1:06:35 h / 2017) Maira Yaqueline Arias from Argentina will do her best to defend her title. But with Manon Kamminga of Holland and Sandrine Tas from Belgium, two highly-regarded winners in recent years will also be at the start. The two Germans Katharina Rumpus and Mareike Thum also will make a legitimate attempt at a top position. Darmstadt-based Rumpus has already been on the podium at the BMW BERLIN-MARATHON five times – but she is still looking to make it to the top step. Thum took gold in the 1.000 meters at this year's World Championships and will be hard to beat in a final sprint.

Final of the WORLD and GERMAN INLINE CUP

For the pros, the BMW BERLIN-MARATHON once again offers an additional highlight. As in the past years, the legendary race will host the final of the WORLD INLINE CUP 2018, the most important international racing series with seven stages in Europe and Asia. The GERMAN INLINE CUP, the most important national racing series, will again select its overall winners in the categories "Speed" and "Fitness" in Berlin.

There are still bib numbers available!

In contrast to the runners' race, there are still some starting spots available for inline skaters. Up to August 26 you still can register here. After it, there will be definitely no possibility for a late registration.