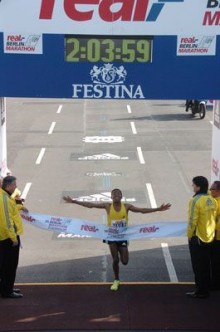 Haile Gebrselassie of Ethiopia shattered his own marathon record in the real,- BERLIN-MARATHON on Sunday morning, running 2:03:59, to become the first man in history under 2:04 for the distance.

On a morning that he described as perfect, with sunshine and temperatures rising from 10C (48F) at the 9 a.m. start, to 14C (55F) at the finish, Gebrselassie followed a quartet of Kenyan pacemakers, including Abel Kirui, who had finished second in the race last year. The group of seven passed halfway in 62:04, 25 seconds faster than in 2007.

The 35 year old Ethiopian also had a couple of Kenyan rivals for company. Charles Kamathi was the more intriguing, since he had ended Geb’s lengthy domination of the IAAF World Championships 10,000 metres. Geb won in 1993/95/97/99, but Kamathi relegated him to third in Edmonton 2001.

However, Kamathi dropped away before the final pacemaker, Kirui, at 35 kilometres, and it was left to the unlikely James Kwambai, whose best was 2:10:20 , to threaten Geb a little longer.

But the contest was effectively over by 37 kilometres, as Kwambai relented, and the tiny Ethiopian was free to enjoy the enthusiasm of the huge crowd, who have been spoiled by six world records on the fast flat course in the last decade.

This is Gebrselassie’s 26 th world record in a career that has lasted close to 20 years thus far, and the time improves by almost half a minute the world record of 2:04:26 that he set in Berlin one year ago. It is exactly five years ago, in this same race that Gebrselassie’s great rival, Paul Tergat of Kenya ran 2:04:55, to become the first sub-2:05 man. Thus in two stages in successive years, Gebrselassie has taken almost a minute off that record, and taken it into new territory.

Another measure of just how much the marathon has improved since top track runners such as Tergat and Gebrselassie have assaulted it may be gleaned from a further bit of Berlin history. When Ronaldo da Costa of Brazil ran the first men’s world record here in 1998, it was 2:06:05.

“I’m so happy,” said Gebrselassie immediately afterwards. “Everything was perfect, the weather, the pacemakers. Two weeks ago, I had a little problem, I ran a 20k forty seconds faster than in my preparation last year. But I had some cramps, and missed a week’s training. I started again a week ago, and had some doubts today, but in the end, everything was fine. This really is my lucky city”.

Gebreselassie also becomes the first man to win Berlin three times, and this latest victory with bonuses nets him €130,000 plus undisclosed appearance fees. Kwambai held on for second place in 2:05:36, close to five minutes off his best, and Kamathi was third in 2:07:48.

Mikitenko, originally from Kazakhstan, but a German national since 1996 has had a golden year, apart from missing the Olympic Games with a back injury. She finished second to Gete Wami of Ethiopia in Berlin 2007, becoming the fastest German marathon debutante, with 2:24:51.

She was a surprise winner of the London Marathon, improving to 2:24:14, and relegating Wami to third. Now she has taken close to five minutes off that best, and with 50 points from two victories, heads the women’s section of the World Marathon Majors, the five-event series – Boston, London, Berlin, Chicago and New York – which carries a biennial prize of half a million dollars for the men’s and women’s winners.