Haile back on world record course 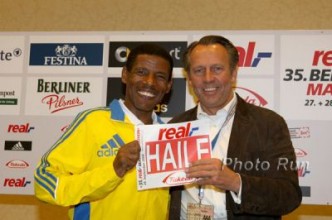 Haile Gebrselassie returns on Sunday morning to the scene of his 25th world record, 2.04.26 in the real,- BERLIN-MARATHON last year. The Ethiopian shows little sign of slowing down, and with a swipe at cyclist Lance Armstrong for daring to retire three years ago (and now planning a comeback), the Ethiopian suggested that he himself might still be running and racing up to the 2016 Olympics, when he would be 43 years of age.

Gebrselassie, who also broke 2.05 in the Dubai Marathon earlier this year admitted he had gone too fast in the first half of the race in the Gulf, and plans a more sedate pace in Berlin on Sunday in the 35th edition of the event. “I learned from my mistake in Dubai, the race was also fast-slow, fast-slow. The pace here in Berlin last year was perfect, and on Sunday, I would like to do the same as the first half last year (62.29)”.

This will be the third successive year that Gebreselassie runs Berlin. In 2006, he got the measure of the course with a 2.05.56 on a windy day, and last year he took almost half a minute off his pal, Paul Tergat’s world record of 2.04.55, also set in Berlin in 2003.

Gebrselassie, 35 chose to avoid the Olympic marathon in Beijing, citing pollution, but finished a highly creditable sixth in the 10,000 metres, a race he won twice, in Atlanta 1996, and Sydney 2000.

He admitted that his switch back to long distance training, in preparation for Berlin had given him a few problems, but insisted he was still here to attack his world record. “I was in good shape until two weeks ago, when I started getting cramps, but when you reach such a high level, you always get problems. I’m confident now, but I can’t predict a time”.

Citing his first international run, as a junior in Berlin, he said he would like to run in next summer’s IAAF World Championships, in the German capital. “Berlin is my lucky city, I ran well in a junior Ekiden (marathon relay) here years ago, and now I’m a marathon runner, I want to run in a world championships here”.

Asked if he would still be around for the London Olympics in 2012, he replied, “Why not in 2016 as well? In sport, what I advise is not to announce a retirement. Look at Lance Armstrong, he retires for three years, and wants to make a comeback. Let retirement come by itself. When someone sets a deadline for retirement, he retires at the time he sets the deadline. That’s why I have plans to run for many years”.

His principal opponent in Berlin is Charles Kamathi of Kenya, who ended Gebrselassie’s long reign as world 10,000 metres champion, the Kenyan winning Edmonton 2001, with Geb in third place. But Kamathi, who set a personal best 2.07.33 for third in Rotterdam Marathon in April, has no delusions about this weekend. “It’s a completely different event. I won’t go with Haile and the pacemakers, I’ll go for a 2.06, 207 pace. But if I see that there’s a chance to catch him, I’ll challenge”.