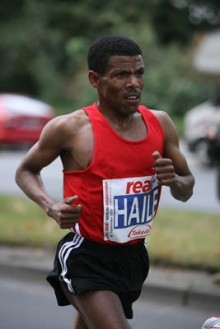 For the third time, Haile Gebrselassie will once again be competing in the real,- BERLIN-MARATHON. On September 28, 2008 , after his victories in 2005 and last year (in a world-record time of 2:04: 26), the Ethiopian world-class runner will again attempt to complete the flat course through the city centre faster than any man before him. With Gebrselassie’s announcement in the spring that due to the expected climatic conditions in Beijing he would not be participating in the Olympic Marathon, the first signs of a possible start in Berlin were emerging. In February in Dubai he made an attempt to improve on his own record time, but fell short by 28 seconds.

How is you training going towards the real,- BERLIN-MARATHON?

Haile: My training for the real,- BERLIN -MARATHON 2008 is going very well. Especially the long runs are going well, and this gives me the confidence I can do, again, something good in Berlin.