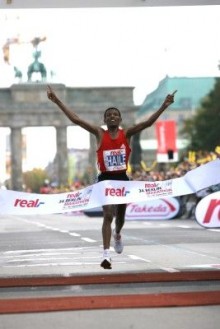 This was his seventh attempt at the marathon, and Haile Gebrselassie finally succeeded in one of the objectives he set himself when he launched himself into the 42.2k race five years ago. He broke the world record in the real,- BERLIN-MARATHON today, running 2.04.26, taking 29 seconds off the record of friend and rival, Paul Tergat of Kenya, who ran 2.04.55 in this same event in 2003.

“This was something special,” said the 34 year old Ethiopian immediately after he emerged from a scrum of photographers, water dripping from his face from the bottle he upended on himself at the conclusion of his run on a cool and overcast Berlin morning. “The conditions today were perfect, last year was too windy (he ran 2.05.56). The spectators were wonderful, I want to say thank you to the people of Germany”.

After heavy rain on Saturday, the conditions were exactly as the diminutive Ethiopian had said he preferred, 14C at the start, rising to 18C at the finish shortly after 11am. It is the 24th record of Gebrselassie’s career, which shows no sign of abating. “I promised I’d run 2.03, that didn’t happen, maybe next time”.

Right on cue, the race director’s telephone rang, and Mark Milde passed the phone to Gebrselassie, to receive congratulations from Tergat, calling from Kenya. “Sorry Paul,” said Gebrselassie, laughing, “I think I had better conditions than when you ran the record. I’ll tell Mark to invite you back next year”. Promising to be back in Berlin himself for the world championships in 2009, Geb passed over the phone, and Tergat said, “That’s sport, records are made to be broken. I’m very happy for him, we are good friends”. Tergat said that his own next marathon was likely to be in Fukuoka, Japan in early December, a race won by Gebrselassie last year.

It was four of Tergat’s compatriots – Rodgers Rop, Wilson Kigen, Andrew Limo and Peter Kiprotich, with fellow Ethiopian, Eshetu Wondimu - who provided the springbord for Geb’s record attempt, pacing him as far as 30 kilometres. None of the other elite tried to follow at all, even over the first kilometres. The initial pace to 15 kilometres was on for a 2.04 finish, but dropped off such that by halfway, something just outside Tergat’s record seemed likely. But, despite being by himself for the last 12 kilometres (whereas Tergat was shadowed by colleague, Sammy Korir, who finished just one second behind), the experience of running the course last year was all the impetus that Gebrselassie needed.

Gebrselassie was followed home in Berlin, at a distance, by three Kenyans. In second place, over two minutes behind, was Abel Kirui, on 2.06.51, a personal best by almost four minutes. Third was Salim Kipsang, also in a personal best, 2.07.29. Fourth was 2005 Berlin winner, Philip Manyim, on 2.08.01.

Geb’s colleague, Gete Wami also successfully defended her title, with a solo run of 2.23.17. That was three quarters of a minute outside last year’ time, and she admitted that she cruised the last few kilometres, in recognition of her plan to run the New York Marathon in just five weeks’ time. “I want to run New York,” she said straight afterwards, and I want to win the jackpot”. New York, and Jelena Prokupcuka of Latvia are duly warned. Wami’s victory moves her into the lead of the rankings in the World Marathon Majors, the two-year five event series, including Boston, London, Berlin, Chicago and New York. If Wami prevents the Latvian winning a third consective New York title, the Ethiopian will win the half million dollar series prize herself.

Irina Mikitenko was second in Berlin, in 2.24.51, the fastest debut in German women’s marathoning history. Third was Helena Kirop of Kenya, in 2.26.27, also a personal best. But, happy as all the other top placers were with their achievements, the day and the kudos belonged to Haile Gebrselassie.