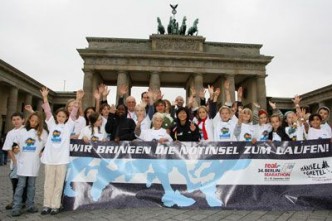 Most performers in elite sport will say that they would compete even if they weren’t paid. On the other hand, while rewards can often seem obscene, eg the $200,000+ per week that many English Premier League footballers earn nowadays, or three times the average YEARLY  wage in the UK, few would deny them that opportunity to earn those sums, if that’s the going rate. But, what to make of those athletes who chase the money to the detriment of their career achievements?

Sanya Richards has probably convinced herself that winning $500,000 for going undefeated on the Golden League circuit this year has more than made up for missing out on selection for the US team in the World Championships 400 metres in Osaka last month. OK, she got selected for the 200 metres, but is nowhere near as good at the half-lap, and finished out of the medals in fifth place. Whereas, the odds against her losing the 400 metres in Osaka would have been astronomical.

But, just one week prior to the US Trials for the World Champs, Richards travelled halfway across the world, to compete in the first Golden League in Oslo. She was so tired from the trip to Europe that she could only finish fourth in the Trials, her first defeat at 400 metres for over a year. But she probably did as much damage to her reputation as the trip did to her form. But, she’s half a million dollars better off!

Speaking of which, half a million dollars is the sum that Gete Wami has in her sights, the prize for winning the first edition of the World Marathon Majors series. But to ensure the victory, and the prize, Wami has to run in both the real,- BERLIN-MARATHON this Sunday, and the ING New York City Marathon in five weeks’ time. And she would have to win both, in order to ensure displacing points leader, Jelena Prokopcuka of Latvia, who also runs New York. That is a tall order, even for an Ethiopian distance runner, despite Wami’s considerable kudos as a former Olympic 10,000 metres, and world cross country champion.

In Berlin yesterday, Wami and her husband and coach, Getaneh Tessema were both playing down the dual challenge. “I can only start to think of New York when I finish the race here in Berlin on Sunday,” said the 32 year old defending champion. “Whether I run New York will depend on what happens here”. “It’s not a 5000 or a 10,000 metres,” said her husband, referring to his wife’s former specialities on the track, “It’s 42 kilometres. But if everything works out here, we’ll go to New York”.

Wami won last year’s Berlin race in a national record of 2.21.34, but that has since been lowered by Berhane Adere, to 2.20.42. Wami was equally cautious about retrieving her record. “It depends on so many things, the weather, the competition. You can never predict. But I’m confident, I know I’m in good form, so we’ll see.

The weather prediction is for 16C (61F), with a strong chance of rain. If that’s not accompanied by the winds of last year, which will have slowed her (and her celebrated colleague Haile Gebrselassie, who also defends his title here), then those are close to optimum conditions for marathon running. On the other hand, the competition is not so hot. Naoko Sakamoto of Japan has run 2.21. 51, but has not raced the distance since finishing seventh in the Olympic marathon in 2004. She took a year off afterwards, and has been fighting injuries since her comeback. She says she is shooting for a first half on 2.25 pace, followed by, hopefully a negative split, ie a faster second half.

Other leading women are Irinia Timofeva of Russia, who ran 2.25.29 back in 2001, and debutant, Irina Mikitenko of Germany, who says she will be happy if she breaks 2.30. Sonia O’Sullivan of Ireland is a surprise late entrant, and her personal pacemaker is even more of a surprise. It is Australian, Craig Mottram, multi-national record holder and former world 5000 metres bronze medallist. O’Sullivan, 37 announced her retirement earlier this season after, arguably the best career in Irish athletics history. She won her first major title, with the World Championships 5000 metres in Gothenburg 1995. Three years later, she won both world cross titles in Marrakech, and an Olympic silver in Sydney 2000. Her marathon best came in London 2005, when she clocked 2.29.01. O’Sullivan now has dual nationality, following marriage to her Australian coach, Nic Bideau, who also coaches Mottram. The Aussie runner is competing on Saturday in the 3000 metres at the Great North Run in Newcastle, then flies to Berlin to pace training partner, O’Sullivan through the first 25k of her marathon on Sunday morning.