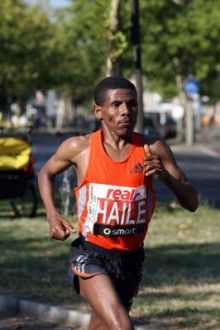 Haile Gebrselassie, the defending champion, will return to the 34th real,- BERLIN-MARATHON. The signing of the exceptional Ethiopian runner was announced by Race Director Mark Milde. Last year Haile Gebrselassie won the real,- BERLIN-MARATHON in the fastest time of the year of 2:05:56 hours. The most spectacular German road race will be held on September 30th with up to 40,000 runners. The race belongs to the World Marathon Majors (WMM).

After Haile Gebrselassie had to give up in the Flora London Marathon in April due to breathing problems, he can now collect the first WMM points for the 2007-2008 series in Berlin. The best marathoners of the world are competing at the World Marathon Majors, collecting points over a two years’ cycle. The winners’ prize purse is one million Dollar, which will be split between the best male and female runners.