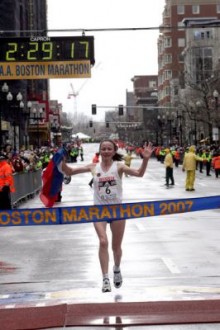 Boston, Mass. (April 16, 2007) – The chase for the inaugural World Marathon Majors Series championship heated up at the 111th Boston Marathon today as champions Robert K. Cheruiyot (KEN) and Lidiya Grigoryeva (RUS) each earned 25 points in the race for the $1 million prize purse. The champions battled the elements and strong fields to further their positions in the series and simultaneously establish themselves as the early leaders on the 2007-08 circuit.

Grigoryeva’s win in 2:29:18 advanced her 06-07 World Marathon Majors total to 26 points, placing her in a tie for fourth place with Deena Kastor (USA) on the overall leaderboard. Jelena Procopcuka (LAT) maintains a commanding lead in the 06-07 women’s series with a total of 55 points, including the 25 she earned with a first-place finish at the ING New York City Marathon last fall. Madai Perez (MEX) finished third to increase her point total to 15, tying her for eighth among the 06-07 leaders. Last year’s Boston champion Rita Jeptoo (KEN) now ranks second among the 06-07 women as she finished fourth to push her point total to 35. Kastor crossed the finish line in fifth, adding one World Marathon Majors point to her now 26-point total.

Today’s competition also marked the beginning of the 2007-08 series. Points earned in 2007 races will count toward both the 2006-07 and 2007-08 series. The top five male and female finishers in today’s Boston Marathon are the current leaders on the 2007-08 leaderboard.

The World Marathon Majors Series will now shift to the Flora London Marathon which will take place on Sunday, April 21. Following today’s Boston Marathon, only five events remain in the 2006-07 series – Flora London, IAAF World Championships in Osaka, real,- Berlin, The LaSalle Bank Chicago and ING New York City. News, information and the current leaderboard can be viewed at worldmarathonmajors.com.