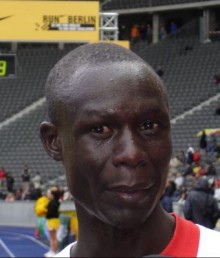 Patrick Makau will run the 27th Vattenfall BERLIN HALF MARATHON on 1st April. The Kenyan has shown some great form in early Febuary when he came in second in Ras Al Khaimah (United Arab Emirates), where Sammy Wanjiru (Kenya) broke the world record. While Wanjiru clocked 58:53 in this race and recently improved to 58:35 Makau set a personal best of 59:13. With this mark he is just six seconds slower than the current course record of the Vattenfall BERLIN HALF MARATHON set by Paul Kosgei (Kenya) last year (59:07). 22 year-old Makau will be aiming to improve further on the flat and fast Berlin course. He will be among more than 20,000 participants, who compete in various events on 1st April.

Patrick Makau, who is also known as Patrick Musyoki, has already won another big Berlin road race. Last May he clocked 1:14:08 to take the ,25 km von Berlin’ despite taking a wrong turn at first when he entered the Berlin Olympic Stadium where this races finished.

At the Vattenfall BERLIN HALF MARATHON on 1st April Patrick Makau will be the runner entered with the fastest personal best. But there will be stiff opposition from his countrymen: Evans Cheruiyot took second place last year with a personal best of 59:13, Francis Kibiwott (60:07) and Wilfred Taragon (60:46) are among the favourites. Four more Kenyans with personal bests sub 62 minutes should make this a thrilling race – Abel Kirui (61:15), Moses Kigen (61:17), Banjamin Itok (61:33) and Johnstone Chepkwony (61:49).

Additionally the fastest ever German runner at this distance has been signed for the Vattenfall BERLIN HALF MARATHON. Carsten Eich has won this event with 60:34 minutes back in 1993. This was probably the best ever international performance by the German, who will retire this spring. 37 year-old Carsten Eich will no longer be able to run with the fastest Kenyans but could still be the fastest German in the race on 1st April.