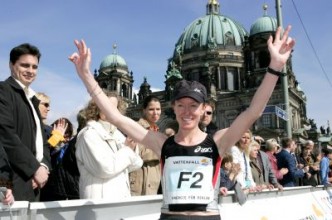 In its 22nd year as the major sponsor of the Boston Marathon, John Hancock Financial Services announced the entry of the world’s top three ranked women marathoners for the 111th running of the race on April 16. Olympian and American Record Holder Deena Kastor is set to compete against returning Boston Champion Rita Jeptoo and World Marathon Majors Leader Jelena Prokopcuka.

American Deena Kastor leads the charge and comes into the race having run the fastest marathon in the world last year. She earned the #1 ranking by Track & Field News for her unstoppable 2:19:36 win in London, where she also improved her existing American record.

Best known for her inspirational bronze medal performance in the 2004 Athens Olympic Marathon, Kastor is a former world record holder in the 5K, a two-time silver medalist at the World Cross Country Championships, and the 2005 Chicago Marathon champion. She is also a multiple American record holder on the roads and track, has won 18 national titles, and is an eight-time NCAA All-American.

“Five and a half years after my first marathon, I am finally running Boston,” says Kastor. “Tradition, sponsors and fans make this the greatest and most well respected marathon in the world. It is an honor to be a part of Boston this year and it is my greatest desire to win this prestigious event.”

Kastor, who lives in California but has roots in the Boston area, added “I am hoping the crowds will be especially loud as I pass the Newton-Wellesley Hospital as that is where I was born 34 years ago.”

Along with signing Kastor, John Hancock announced they have also secured 2006 Boston Champion Rita Jeptoo of Kenya to return and defend her title. Only 25 years old, Jeptoo is a rising star in the sport and brings strong credentials to the race. Winning the first two marathons she entered in Milan and Stockholm, Jeptoo then placed seventh at the 2005 World Championships. After her Boston Marathon win last year, she ran the fourth fastest 20K of all time and then went on to finish a strong fourth in the New York City Marathon.

These accomplished women join Jelena Prokopcuka, of Latvia, who as the reigning leader of the World Marathon Majors series announced her commitment to return to Boston earlier this month. Prokopcuka and Jeptoo faced off last year in the closest 1-2 finish in the race’s history with Jeptoo taking the win by a slim 20 seconds. Prokopcuka returned the favor in New York City by besting Jeptoo in that showing. A three-time Olympian, Prokopcuka holds multiple national records on the road and track and has won the New York City Marathon the past two years.

Track & Field News ranked Kastor the #1 runner in the world last year and gave Prokopcuka the #2 rank and Jeptoo the #3 rank. These three top athletes will join the complete John Hancock elite team, which will be announced in March.

“As the American record holder and an Olympic medalist, Deena now headlines Boston playing host to the USA Women's Marathon Championship,” said Guy Morse, Executive Director of the Boston Athletic Association, which organizes the marathon. “More important, she could become Boston's first American champion in more than 20 years, but she'll have to defeat one of the strongest fields ever. Rita proved herself here last year, winning the closest women's race in Boston history over Jelena—and with all three women competing in April, the 111th Boston Marathon is already shaping up to be one for the ages.”