Haile Gebrselassie: „I will run as fast as I can in Berlin“

The Ethiopian running legend about his marathon preparations, the future and an emergency landing 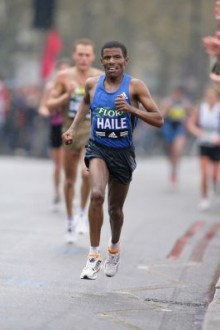 Haile Gebrselassie at the Flora London Marathon in April this year.
© Photo Run

Haile Gebrselassie will run the 42.195 k distance for the first time in Germany on Sunday’s real,- BERLIN-MARATHON. The 33 year-old Ethiopian already set 21 world records in his outstanding career. But the two time 10.000 m Olympic champion is still chasing one major goal: the marathon world record, which is held by his big rival Paul Tergat. The Kenyan had run 2:04:55 hours in Berlin 2003. The flat course in Berlin hands Haile Gebrselassie a great chance now to improve the mark of Paul Tergat. His personal best stands at 2:06:20 hours, set when winning in Amsterdam last year.

What are your goals for Berlin, are you able to run a world record in Berlin?

Haile Gebrselassie: „I want to win the race and at the same time I want to run fast – both is important. I will definitely run as fast as I can. But I don’t want to talk much before the race but perform well instead. Sure, I know that the course in Berlin is fast. I hope it will be a special race.”

One of your rivals is Kenyan Sammy Korrir, second fastest marathon runner of all times with 2:04:56 hours.

Haile Gebrselassie: „That will be a great duel, which is good for the spectators – though less good for me. But for the race it is very good indeed. I hope that he is prepared very well, because I will be very well prepared, too.”

Your last test race prior to the real,- BERLIN-MARTHON should have been in Sicily. But when the 10 k race was started on August 19th you were not there – what happened?

Haile Gebrselassie: „There was a problem with the airplane in Addis Abeba. Somehow a rabbit blundered into one engine. After the take-off it started to smell weird. We thought that they were preparing the food – but it was rabbit. After flying already 1:40 hours the captain decided to fly back and prepared an emergency landing. Due to that I missed my connection flight and wasn’t able to travel to Italy.”

Did the missed race affect your marathon preparations?

Haile Gebrselassie: „It would have been nice to run the 10 k, but 10 k are not a real marathon test anyway. In so far it is not a problem. Now the real,- BERLIN-MARATHON will be my first race after the Flora London-Marathon. Since the race in London I was just preparing for the race in Berlin. I will come to Berlin, run and see what happens – I don’t have any worries.”

How was your training, also compared to the Flora London-Marathon, where you were only ninth?

Haile Gebrselassie: „I was in a very good shape before London, but it simply wasn’t my day. When I saw that it was raining I somehow knew that it wouldn’t work out well for me. On slippery streets I have problems with my balance because of my running style. I was fit in London and now I will be in very good shape again. Additionally, I have now a better feeling for the distance after three marathon races.”

What was the biggest achievement in your career?

How is your relationship with marathon world record holder Paul Tergat?

Haile Gebrselassie: „Paul is different than anybody else. There are a lot good runners but he is special. There is no thing like friendship in a competition, but there is no feud between Kenya and Ethiopia either. Apart from the competition we have a really great relationship. When he comes to Addis Abeba he is part of my family – as well as the other way around when I come to Kenya.”

Do you see a limit in marathoning – what is possible?

Haile Gebrselassie: „Generally, I don’t see a limit. I think that my generation should be able to run 2:03 hours. In future I hope the world record will be pushed to sub 2 hours. But I don’t know how long it will take until we will reach that – 20 or 50 years? 45 years ago Abebe Bikila was running 2:15 hours – now we are ten minutes faster.“

What do you think about the most recent doping scandals in athletics?

Haile Gebrselassie: „It is important to find the people who cheat and those who are responsible for it, because then the clean athletes can be protected. This news is not nice for the sport but at the same time it is important to convict the frauds.”

Are you thinking about a certain time when you will end your career?

Haile Gebrselassie: „As long as I am the fastest in training, I don’t think I have a reason to retire. There is no certain point of time when I plan to step down. But the Olympics 2008 are definitely on my agenda.“