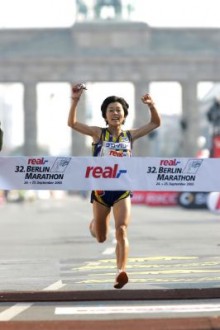 „We are happy that we were able to sign the Olympic Champion and last year’s winner for a second time. We can expect another high performance and we’ll hopefully have another winning time of sub 2:20 hours,“ Race director Mark Milde said.

"We're trying to get Mizuki Noguchi a good competition"

„It looks like that the Japanese winning streak in the women’s race, which began in 2000, will continue at the real,- BERLIN MARATHON. But we try to sign high class competitors for Mizuki Noguchi,“ Mark Milde announced. The real,- BERLIN MARATHON will be the only marathon worldwide where the Olympic Champion has been running a marathon since her victory in Athens 2004. In the spring of 2005 and 2006 the Japanese did not run a marathon.

Noguchi wants to get on WMM leaderboard

At the real,- BERLIN MARATHON Mizuki Noguchi will start her WMM campaign. The best marathon runners in the world are collecting points at this series over a two-year cycle. Besides Berlin the BAA Boston Marathon, the Flora London Marathon, the LaSalle Bank Chicago Marathon and the ING New York City Marathon belong to the World Marathon Majors Series. Marathon races at Olympic Games and World Championships will count as well. The best male and female runner will split a jackpot of one million US-Dollar at the end. A maximum of four races will be counted.