„We want to present athletics in Berlin as young, attractive and dynamic“

"I am convinced that we are able to promote a similar enthusiasm for the IAAF Worldchampionships in Athletics as we are now experiencing for the soccer world cup". 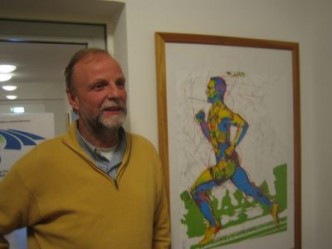 Heinrich Clausen - the organizator of the XII. IAAF World Championships in Athletics 2009 Berlin in front of his office in the Olympic stadium
© hme

Mister Clausen, what is the head of organisation doing three and a half years prior to the start of the World Championships?

Heinrich Clausen: „After we built up an office the planning phase immediately began. It is about concepts and structures as well as to distribute a master plan. In some areas we are already in a phase of detailed planning. Hotel reservations, the IAAF congress or concepts for the stadium are among these. We deal with questions about infrastructure and logistics and set a budget. It is a little bit like a baby. The human character is formed already in the first years. We have to make sure that we’ll have a base with good initial conditions, that will characterize the 2009 World Championships successfully.”

Do you know what the budget will look like?

Heinrich Clausen: „The total budget will be between 40 and 45 Million Euro.“

Heinrich Clausen: „At the moment I work with a colleague in our office in the area of the Olympic Stadium. All steps are put forward to Mister Henze. We developed a manpower concept and will start to recruite employees soon. We already have a marketing manager as well as a director for sport tecnique.
Miss Gabriele Thiele works for us since January 1st and already moved in our offices. She is responsible for generating new ideas for example for the marathon. We will soon hire a logistics manager too. I think we will have a staff of 45 full time employees in the final phase. The latter of them will join our team approximately one year prior to the World Championships. But the work won’t lie only on the shoulders of our employees.
We will work together with many honorary employees and volunteers. Some areas will be cared for by external companies. These could be areas such as promotion, opening ceremony and the cultural program.”

Keyword promotion: You have a difficult situation at the moment as the public is only aware of the soccer world cup.
What can you do and how do you see the situation after the final on July 9th?

Are there problems in the planing phase standing out? The demolition of the International Congress Center (ICC) in Berlin is discussed over and over again for example.
In the World Championships application it was scheduled for the IAAF Council meeting.

Heinrich Clausen: „A possible demolition of the ICC will not affect us, because the IAAF Council meeting will take place in the Estrell Hotel. Sure there are crucial points as everybody knows. One for example is the airport and the connected accreditation center. But we will find a solution for that.“

Apart from the planning – what are your big goals or visions?

Heinrich Clausen: „We want to develop a passion for athletics. We will try to have the Olympic Stadium sold out at least for the evening sessions. I am confident that we can make this. But we also want to show athletics to the young generation to wake new enthusiasm for this sport.
We will present athletics in Berlin as young, attractive and dynamic.”