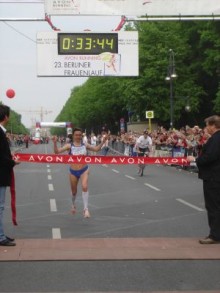 The big favourite showed a sovereign performance: Irina Mikitenko won the 23rd AVON RUNNING Berlin Women’s race. The 33 year-old, who had finished seventh in the Olympic 5,000 m final in Athens 2004, ran the 10 k in 33:45 minutes. She had a winning margin of exactly one minute to Claudia Dreher (34:45). Third was Magdaline Chemjor (Kenya) in 35:18.

11,731 women and girls were cheered on by thousands of spectators at the biggest German women’s fitness event. Besides 4,869 runners at the 10 k race, 6,243 women participated in the 5 k run and 619 children ran at the 800 m Bambini race. „This AVON RUNNING Berlin Women’s race was big fun again and it had a great atmosphere,“ said Race-Director Mark Milde and added: „We are happy to have another prominent German runner winning here with Irina Mikitenko.”

The elite 10 k race was a one woman show in Berlin’s Tiergarten: Irina Mikitenko ran her own pace from beginning of the race and took the lead immediately. Mikitenko, who has been the best German runner at international competitions in the past years, had quickly opened a big margin to Claudia Dreher. „I wanted to win, my time was secondary. If I would have had tougher competition here, I would have been able to run faster,“ said Irina Mikitenko, who waved to the spectators on the last stretch. In August she will run the 10,000 m at the European Championships and then plans her marathon debut in fall.

The starting signal for the 10 k race was given by the German cross country skier Claudia Künzel – a multiple Olympic medal winner. Berlin’s Melanie Krüger won the 5 k race in 19:52 minutes ahead of Marit Schützengübel (20:04) and Birte Schulz (21:25). There were also 5 and 10 k races for power walkers and Nordic walkers. These were events with fun character only.