“Nothing goes without elite athletes”— an interview with Manfred von Richthofen, president of the German Sports Federation 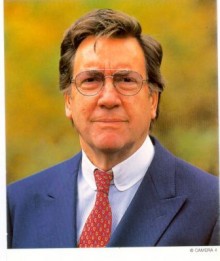 What role does the sport of running play in German sports—and where do you see its development?

Manfred von Richthofen: “Running in Germany has experienced fast growing development — and that is not only the case of the marathon. Tens of thousands of people are keeping fit by running, whether in the forests or training on the streets.
It is a fun sport that makes people happy and very healthy at the same time. The development can be compared to that of cycling. And the dimension it took was just as unanticipated as was that of the “Trimmbewegung” popular health movement.”

What part did the  real,- BERLIN MARATHON play in the development of running in Germany?

Manfred von Richthofen:  “The real,- BERLIN-MARATHON is the flagship of all running events in the Federal Republic of Germany.
And the long-time head organizer, Horst Milde, was the first ambassador of running for the masses in Germany. His work was trend-setting, not only in Germany but internationally, as well.  I followed and observed his activities and the events that he called into being during my position as the president of the Berlin Sports Federation, and often supported them, as well.
Horst Milde is now receiving the recognition truly due to him, for he is the paramount personality for the sport of running in Germany. SCC-RUNNING is lucky to have such a man, with his knowledge and connections, still at its disposal.”

There is a lot of coverage of the real,- BERLIN MARATHON in the media. Do you think that in the future running will become even more prominent in the media?

Manfred von Richthofen: “The rule is valid for all kinds of sports: the media always gets involved when top international athletes are participating. That is true for running, as well. If the interest from the media is to increase, then the respective elite level of sport is necessary. These discussions take place again and again, and there is one clear answer: Nothing goes without elite athletes.”

How do you view the total development of SCC-RUNNING, including the area of inline skating?

Manfred von Richthofen: “The developments taking place within SCC-RUNNING are pleasing. A few years ago, no one would have thought that people would be fighting to get a race number.  Inline skating is also experiencing fast growth. At the DSB, we have registered two kinds of sports that are currently very popular with the youth: inline skating and climbing.”

In what direction should further initiatives go?

Manfred von Richthofen: “One decisive issue for the future is the involvement of children in events. For me that especially means cooperation with the schools. A lot more has to be done on the part of the [school] administration. All in all that is pretty lame, or the general fitness and health conditions of school-aged kids would be better. There are a few intermittent initiatives, however.
The real,- MINI-MARATHON (4,2195 k) for the schools should be seen as a prime example.
Such events should be put on across the country.”