US Marathon Star Deena Kastor will race the Vattenfall BERLIN HALF MARATHON, April 2.

The US star hold's the US half marathon rrecord with 67:53 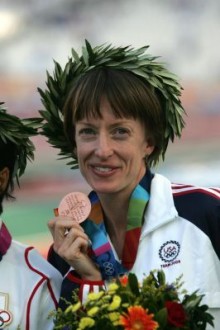 Deena Kastor, the Olympic bronze medallist in the marathon in Athens in 2004 will participate in the 26th Vattenfall BERLIN HALF MARATHON on April 2. She will be among the highest calibre competitors in the history of the race, according to an announcement made today by SCC-RUNNING race director, Mark Milde. Over 18,000 participants are expected at Germany’s largest half marathon, including not only runners, but also inline skaters, wheelchair competitors, hand cyclists, walkers, and Nordic walkers.

Race Director Mark Milde : She is a Star ...

“We are thrilled to have Deena Kastor, a star in the international running scene, participate,” stated Mark Milde, adding: “And we are hoping that she will achieve a time in the vicinity of our course record.” The course record of 68:22 minutes has been held since 2000 by Joyce Chepchumba (Kenya).
In Berlin, Deena Kastor will face among others last year’s champion Luminita Zaituc (LG Braunschweig), who won with a time of 71:04 and hopes to clearly improve on that time this year.

Holds the women's US half marathon record